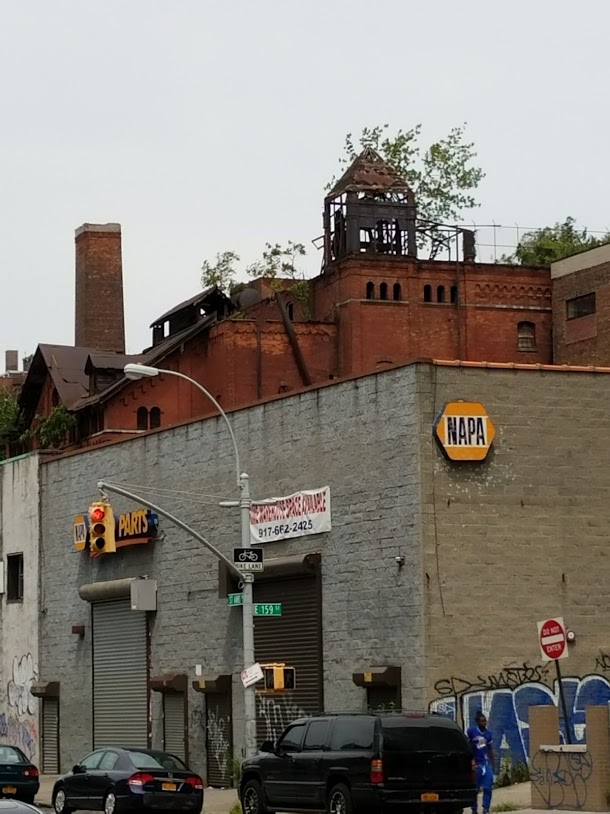 For New Yorkers, brewing is in our roots.
The tradition of brewing in the Bronx is as old as the seventeenth-century Dutch settlers and colonial forefathers.  Jonas Bronck (1600-1643), our first modern settler, brewed; Jacobus van Cortlandt (1658-1739), father of future New York City mayor (1791), who built the Bronx’ oldest standing building, the Van Cortlandt House, brewed too.  Most housewives brewed at home for their families.  Even President George Washington, whose favorite drink was ale, had his own recipe for “small beer”, or low alcohol beer.  But when German immigrants began to arrive in the mid-nineteenth century, they brought lager beer and took over the industry.

For almost sixty years, the Bronx successfully brewed beer: until Prohibition maimed the industry.  Hupfel’s went into the mushroom farming business.  North Side Brewery and Haffen’s closed, as did Zeltner’s years down the road.  Only three of the remaining breweries at the time continued to brew beer but only at the allowable .5% alcohol (Ebling’s, Eichler’s, and Mayer’s).  It was an end of an era and a way of life for so many Bronxites who’s livelihoods depended on the beer industry

The brewery was located at what is today East 152nd street and Melrose Avenue (before Melrose Avenue was constructed) by architect, Michael J. Garvin in 1902.  Four-foot thick walls formed the storage vaults which extended over 200′ to E 151st Street.  Haffen brewery was razed in 1917.

Matthias Haffen came to the USA from Germany in 1831 and married an Irish woman, Catherine Hayes; they settled in a semi-rural Melrose in a house at the NW corner of 152nd and Courtlandt Avenue.  The Haffens had four sons, two of whom (Martin and John) went into the brewing business.  Their other two sons were high level city officials.  Henry Haffen  was Street Commissioner and Highway inspector and Louis Haffen, a politician.

Matthias was also head of Protection Hall, a tavern/social hall complex at 152nd and Courtlandt avenue which also housed the Melrose Guards, a quasi-military organization that was based there to protect Immaculate Conception Church during the anti-Catholic riots of 1851-53.  John Haffen (1847-1910) who lived at 653 Courtland Avenue became president of Haffen Brewery in 1871; in 1887 he founded Dollar Savings Bank.

Louis F. Haffen  became Park Superintendent and City Engineer and was in charge of street improvements in the 23rd and 24th wards.  He was also the first Bronx Borough President!  Louis Haffen is known as the Father of the Bronx as he was reelected three times. The Haffens are buried on ‘Brewer’s Row’ at Woodlawn Cemetery in the Bronx.

Note that the Kolb plot adjoins that of the Eichler’s family plot.

HUPFEL
Originally owned by Xavier Grant, the brewery was located on St. Ann’s Avenue between East 158th and E. 160th streets.  Today, it is the only nineteenth-century brewery still (barely) standing. (Please see bottom of page for the Hupfel Video.)

In 1863, Anton Heupfel, purchased the business, and eventually passed it on to his two stepsons, Adolph and John.  By 1883, John became the sole owner.  John had two sons and two daughters; the oldest son, also named Adolf, studied Brewing and “Bacteriology” in Berlin and Copenhagen.  The brewery borders on a ridge and the property came to be known as “Heupfel’s Hill”.
During prohibition, the brewery utilized its caves that were quarried for lagering and became a mushroom farm.

At some point, the family Americanized the name, dropped the first “e” and eliminated the umlaut over the “u.”
Closed in 1938.

EICHLER
John Eichler was born in Bavaria on October 20, 1829 and was apprenticed to the Wolff & Ott Brewery in his hometown of Rothenburg.  Later, he went to work for the Wertheim Brewery in Baden followed by the Hazen Brewery in Berlin where he learned all aspects of the brewing trade along the way.  John Eichler came to the United States in 1853.  At 29 he came to New York and quickly found work at the Franz Ruppert’s, Turtle Bay Brewery in Manhattan where he was employed until 1865 when he acquired the Kolb Brewery on Third Avenue and E 169th street in the Bronx.
(Franz Ruppert was father of Hellgate’s brewer Jacob whose Knickerbocker label was extremely successful and located in Manhattan on second avenue between 90th and 94th streets –later purchased by Rheingold Beer.)

Eichler lagered his beer in caves in the Fulton avenue hillside.
The Eichler Mansion, on the south side of E 169th street, west of Fulton Avenue, became part of the Bronx Lebanon Hospital complex and was only demolished in the 2010.

By producing near-beer, Eichler was one of the few Bronx Breweries to survive prohibition.  Eventually absorbed by Rheingold Brewing in 1947, which used the Eichler label until 1950.  It closed it 1950 and the plant was demolished about 1965.

Eichler died in Germany but was also buried in Woodlawn Cemetery in the Bronx.

EHRET
George Ehret (Hell Gate Brewery): Although not a Bronx Brewer, Ehret had a spectacular building in Manhattan’s Yorkville section.  However, there is a Bronx connection as he started his career by working for the Hupfel Brewery in Morrisania.  He also ran a ferry from Point Morris.
Ehret’s mausoleum can also be found at Woodlawn Cemetery and it is spectacular.

EBLING[2]
Philip and William Ebling established their brewery in 1868 on land bought from Anna Beck.  Located on the hillside of St Ann’s Avenue from E 156th to E 158th streets, the brewery complex was officially called Aurora Park Brewery, although everyone called it Eblings. The site included a picnic ground, bowling alleys and dance halls and was used for opera, concerts, banquets and (of course) Oktoberfests during the heyday of the ‘German South Bronx’, 1868-1950.

John C Heintz (1862-1933), son of Louis Heintz (First street commissioner and Shnorer’s Club member) married Ebling’s daughter was also the nephew of John Eichler.  John Heintz worked his way up the ranks in the business and eventually became the President of Eichler Brewing. He was also president of the Brewers Board of Trade, treasurer and trustee of New York State Brewers Association, and a director of North Side Savings Bank, among many other positions.[3]
The Eblings are also interred at Woodlawn Cemetery.

DAVID MAYER
Born 1/8/1827, Mayer was a Jewish peddler who worked on the Erie Railroad and as a language teacher.  He married a Miss Bernhardt of New York and had seven children.  Mayer went south and fought for the Confederacy in the Civil War.  After losing everything, he returned to New York and opened the David Mayer Brewery after a fire destroyed his brother’s brewery, The Clifton Brewery in Staten Island in 1879.

Located on the north east corner of Third avenue and 170th street.  Heinrech Zeltner was a third-generation brewer from Germany (1854).  He purchased his brewery from Wilhelm Jaeger and  opened a dance pavilion and picnic park called Zeltner’s Park  He also rented a pond in Crotona Park where he retrieved his ice blocks, also called Indian Lake[4]
The Zeltners are also buried on Brewer’s Row in Woodlawn Cemetery.

KUNTZ
From 1867-1902 Major Louis Kuntz ran his brewery on 168th street on the west side of Third avenue.  It was sold by son, Michael to George Gminder in 1902 where it ran under the name, Northside Brewery.  The Kuntz’s  plot can also be found at Woodlawn Cemetery.

Note the sad but all too common cases of infant/childbirth mortality (wife Catherine died in February of 1871; infant Joseph died 6 months later).  Adolf’s second wife was Madeline Kuntz who had a baby called Josephine who also died at only 2 months of age.  Wife Magdalena died in 1889.
Stepdaughter Magdalene (Lena) Hupfel (Hupfel!) sued in 1899 over father’s will.

RIVINIUS
Another short-lived brewery at 169th and Third avenue.  Charles Rivinius listed as a brewer in the Morrisania Directory in the 1870’s and the Westchester Country Directory of 1869. Most likely absorbed into the Eichler “Empire”.
Also buried at Woodlawn.

American Brewing Company
North east corner of Third avenue and 168th street as seen on the Bromley map of 1897.  It was separated from the Mayer brewery by a coal yard.

Bruckner’s Brewery
In 1869, George, Louis, and John A. were the brewers of this Melrose brewery.
Located on Washington Ave and William street (Elton and E 161st).

Clarke’s Brewery
In business in 1870, brewer Robert Clarke’s brewery was on Carr Avenue and St. Ann’s.

Deiderman’s
One of the earlier breweries located on the east side of Third avenue just north of Westchester avenue in the 1850s.
Sold to Peter Kirchof Brewery in 1864.

Need help with the Commons? Visit our
help page Send us a message

Built with WordPress Protected by Akismet Powered by CUNY